Our beautiful ragdoll queen, Figa Hold ME*PL, gave birth to a girl and 5 boys with ICH CASPER Koci Szarm*PL on August 15th 2016. We're really lucky to be able to mate Figa with Casper as they're both beautiful cats with amazing personalities. 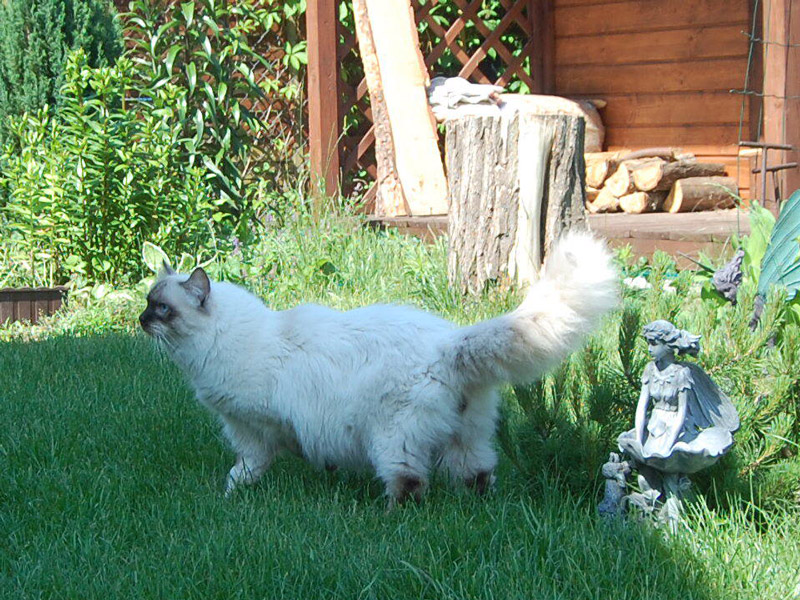 Apple Pie is the only female of this whole litter of 6! One side of her lip is seal while the other is white, which makes her quite distinctive. She was the first to explore outside of their weaning box and the most regular escapee. Now, she's very much like her dam, Figa, preferring to lie on a podium somewhere instead of running around in a mad dash with her brothers. She's compact and stocky with thick fur.

Big Blue got his name based on the light blue necklace that we gave him wen he was born to keep track of his weight as he grew. You have to do this because all ragdolls are born pure white. As he started to mature, his brothers even darkened quicker than him. He's actually seal - not blue - but the name stuck.

Big Blue was, for a long time, the biggest of this litter, and had the longest fur at the beginning. Now, most of his brothers have caught up to him in one way or another, but he's still the most impressive mitted kitten in the litter. For this reason, we've decided to keep him as a stud male in our cattery.

Addicted to Love quickly developed the most amazing coat of fur. It was full-on frizzy, like Doc from Back to the Future. He looked awesomely weird and quickly became most visitors' favourite kitten. He has a personality to match, being one of the first to attach himself to Paulina as her new, best friend.

Addicted to Love (ragdoll litter “A”)

Andromeda is a very impressive kitten, all round. His personality matches his stunning, good looks. He's a natural sock hunter and is devastatingly quick to attach himself to any feet that start moving in his vicinity. He also loves to lounge on the closest male human's lap after an hour of vigorous play. Is he was mitted, we probably would have decided to keep him as a stud male in our cattery.

Alpine has a triangular white area covering 1 side of his lap and extending all the way up to the top of his nose. His name was an obvious choice for me - Alpine - because the mark looks like a snowy peak. It was also an obvious choice for Paulina - Milkshake - apparently because his colour looks "all mixed up". Either way, his personality is similar to Andromeda in that he's really outgoing and loves to run around, playing with our puppies and our feet. He does tend to sleep closer to his mommy than the others too. He's really sweet, and very distinctive.

Ambassador got his name - Grey - from the fact that he very quickly darkened much, much more than all of his brothers. At 4 weeks it was already apparent that he's going to have the deepest seal coat of any of this litter. He's also probably the heaviest of the boys but shorter and much stockier than the others. He's really sweet but quite independent, like his mommy, and seems to prefer females (or maybe he just doesn't like me much :P).